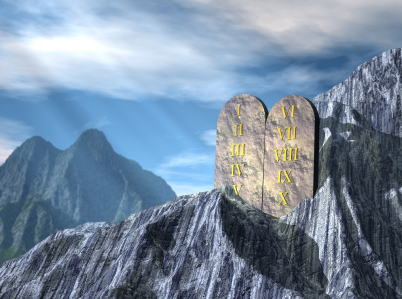 This year, parshas Bamidbar is read on the Shabbos immediately prior to Shavuos. Is there a thematic connection between the two? Rabbi Yissocher Frand cites such an association from insights from the Chidushei HaRi”m and Rabbi Yaakov Kamenetsky that we excerpt below from Torah.org:

“In this week’s parsha (Bamidbar)  we learn about the order and divisions in which the Jewish people traveled and camped in the desert. Moshe was commanded to divide the encampment into four divisions, each with its respective flag. Each division of three tribes traveled and camped along one of the sides of the Mishkan, with the Mishkan in the center.

“The Medrash explains that when HaShem told Moshe that the Jews were to travel in a specific formation around the Mishkan, Moshe began to complain that if he specified such a formation, controversy would break out. ‘If I tell Yehudah to camp in the east, they will say they want the south, and so it will be with each and every tribe.’ HaShem told Moshe not to worry — each tribe would know and accept their own place willingly because ‘they have travel plans predetermined from the days of the Patriarch Yaakov.’ The travel formation in the desert was identical to the arrangement that Yaakov Avinu [our forefather] made for his sons to use when they carried him out of Egypt to be buried in the Tomb of the Patriarchs in Chevron. The same three sons were in the front, the same three were on each side and the same three were behind.

“This Medrash is very difficult to understand. What was Moshe worried about in the first place? These were people of great moral and spiritual stature. They were not petty individuals who would be jockeying for position. In addition, what is the connection between their travels in the desert and their travels when they carried Yaakov’s coffin?

“[One] approach to this Medrash is as follows. Moshe’s concern was not about the physical location of the Tribes during their travels in the desert. Moshe was worried about something else entirely. Many of the commentaries point out that the traveling locations of the Tribes around the Mishkan represented much more than the way in which they traveled. The groupings represented how they were to contribute to the nation as a whole.

“In order for a nation to be successful, there must be a division of labor. Not everyone can perform the same functions. There must be ‘Priests’ and ‘Israelites,’ scholars and supporters of Torah, men and women. In order to create a successful nation, everyone must work toward a common good. Each person needs to do his part for a higher purpose.

“The blessings that Yaakov gave to his sons in Parshas Vayechi do not all appear to be ‘blessings.’ Some were actually critiques: ‘You are too this, and you are too that.’ The commentaries explain that before Yaakov’s death, he gave to his children the greatest blessing that any parent can give. Yaakov told them their strengths and weaknesses. He told them, based on their natures, what their roles in life and mission among the Jewish people would be. Based on the personalities and characteristics and strengths of each son, Yaakov defined exactly what they should be and what they should do.

“HaShem told Moshe not to worry about assigning roles to the Tribes. They will not resent it or rebel because their great-grandfather already assigned the roles to them. ‘No arguments will emerge from your re-assignment of these same roles.’

“This, says the Chidushei HaRi”m, is why we read Pashas Bamidbar before the Holiday of Shavuos. In order to achieve a Kabbalas HaTorah [reception of the Torah], we need ‘and Israel camped there (vaYichan) opposite the mountain’ [Shemos 19:2]. Our rabbis emphasize that the verb vaYichan (they camped) is in the singular to indicate that when the Jewish nation camped prior to receiving the Torah, they camped with unity ‘as one man, with one heart.’

“How is unity achieved? How are jealousy, envy, and argument removed? We read the parsha of Bamidbar – about the encampment of every man by his appropriate tribe and by his appropriate flag. We read how everyone must understand that every person plays a vital role in Klal Yisroel – regardless of whether he is the teacher, or the doctor, or the fund-raiser, or whomever. The only way we can be a nation is by understanding and appreciating our individual roles.

“Rav Yaakov Kamenetsky points out in his sefer Emes L’Yaakov that the whole ‘Order of the Flags’ was not commanded until after the second year in the wilderness. What happened when they traveled during the entire first year? Rav Yaakov explains that during the first year there was no Mishkan, no Tabernacle, in the middle. Only after the Mishkan (representing the concept of HaShem’s Divine Presence, and which was to be in the center of this traveling formation) was erected in the second year was there a command to move in formation.

People will object if you arbitrarily demand that they be assigned to specific roles. But if people realize that the purpose is for the sake of accomplishing a common goal; if they realize that they are bound together for one centrality, then they will joyfully contribute with individual roles, knowing that this is the only way for a team or a nation to function. Only then can they reach the level of ‘one man with one heart’ and merit the receiving of the Torah.”

This essay from Rabbi Frand highlights how appropriate it would be to teach the Morasha shiur addressing Defining One’s Role in Life as a compelling class for Shavuos night.

Feel free to also consider teaching the three Morasha shiurim on Divine Revelation and Evidence for Torah M’Sinai we highlighted earlier this year for Parshas Yisro.

You might also consider the NLE Morasha class on: Torah Study – The Foundation of Jewish Life.