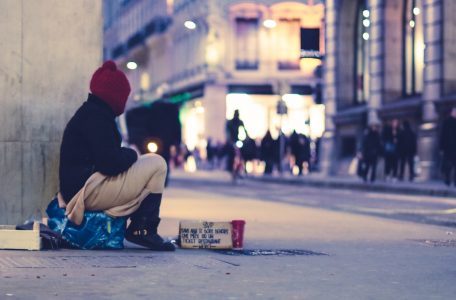 As I write these words, it is 27 degrees here in Passaic, NJ. On cold days like today, I recall Rav Moshe Feinstein zt”l. Years ago, on freezing days such as today, many homeless people would gather in the corridor outside of the Beis Medrash of Mesivta Tiferes Yerushalayim in the Lower East Side to stay warm. Many of these poor, pitiful people were not even Jewish. Yet, they felt comfortable crowding into the yeshiva building’s heated corridor to stay warm and not freeze.

It was not uncommon for Rav Moshe Feinstein zt”l himself to arrive at the yeshiva and be compelled to walk an obstacle course as he gently navigated the corridor. He tried his best never to disturb a sleeping homeless person, and he also did his best to get as quickly as he could into the Beis Medrash.

One day a potential large donor was coming to see the yeshiva. An administrator felt that the presence of these shabby, pathetic people would not contribute to the proper ambiance for a great makom Torah, and the potential donor would give a pittance of money and not the anticipated large donation.

The administrator approached Rav Moshe with the issue and explained how he would prevent the homeless individuals from entering the building and how the floor would be polished. The building would be a shining example of a true makom Torah.

The man continued, “The Rosh Yeshiva realizes that many of those who come during the cold are not even Jewish. Many of them have not bathed for weeks, and we have no obligation to be a homeless shelter. I will notify them that they are no longer welcome and be rid of the problem. I have taken care of all the plans. Do I have the Rosh Yeshiva’s approval to remove them?”

Rav Moshe sat quietly as he lowered his gaze. After a moment of silence, Rav Moshe raised his head and asked just one question. “But where will these people go in the freezing cold? Are they not created B’Tzelem Elokim (In G-d’s likeness)? How can we allow them to freeze?”

The administrator lowered his eyes as he realized what Rav Moshe was saying. The homeless people remained, and the yeshiva kept learning.