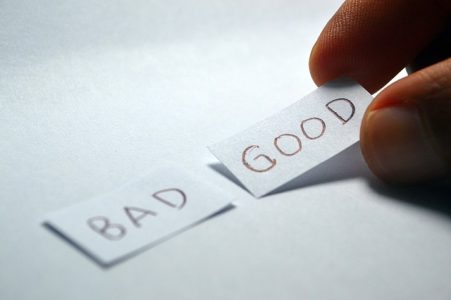 From a very young age, parents teach their children to be a “good boy” or “good girl.” Everyone usually aspires to be a good person, and according to studies, almost every individual thinks of himself or herself as a “basically good person.” We all want to do “the right thing” in every situation, and help others when possible. Yet, when these acts of goodness are pitted against other values that are highly regarded by society — such as amassing money, attaining success and power, having fun or other, similar values — goodness and acting ethically often take a back seat and fade from the forefront of priorities. How important is goodness in Judaism? As in every society, within Judaism there are competing Jewish values such as Torah learning and performing mitzvot— commandments, rituals and beliefs. How does “goodness” and proper behavior towards others stack up in the hierarchy of Jewish values? How much of a Jewish priority is being a good person and how important a goal is it for each Jew to attain?

IN JUDAISM, ACTING MORALLY AND HELPING OTHERS IS THE HIGHEST VALUE

Judaism, as will be shown through numerous sources, places caring about others and acting benevolently towards other people as the absolute highest priority of the religion. From Scripture to the Talmud to the Midrash and beyond, the value of behaving ethically towards other human beings describes the essence of being Jewish. For example, when declaring which one principle epitomizes Judaism, Rabbi Akiva states it is the verse, known to many: “You shall love your neighbor as yourself.” He mentions nothing about G-d, beliefs, or man-to-G-d mitzvot in describing the essence of Judaism. Rather, only good behavior towards one’s fellow man. In a similar vein, Hillel was forced to encapsulate all of Judaism to the potential convert standing on one foot. Hillel stated essentially the same thing as Rabbi Akiva, except he couched the idea in a more negative but practical manner: Do not do to your neighbor what you would not want to have done to you. He continues and says that all the rest of Judaism is only commentary upon this one essential principle and that the convert should now go learn all of the Torah.

The Torah itself also emphasizes this concept. It tells us not merely to attain it, but to run after and pursue righteousness (sometimes mistranslated as “justice”). This is commonly understood to signify that each Jew should insure that he or she should do the right thing in every situation, i.e., specifically between man and man. The Torah emphasizes the importance of this notion in the verse in two different ways: it repeats the word “righteousness” twice, and it also tells us to run after this concept. In no other place in the Torah (and in only one instance in the Psalms, about pursuing peace) does G-d use the term “run after it.” Jews are not commanded to run after keeping Kosher or run after eating Matzah on Passover. Only with regard to treating others in the right manner must one actively pursue this goal. The prophet Micah also informs us exactly what G-d wants from each Jew: to do justice and kindness as one walks modestly with G-d. According to the commentaries, this refers only to those commandments that pertain to our goodness and how well we treat our fellow man.

In addition to the many individual commandments mandating proper behavior between Jews and others, there is one over-arching commandment, a general mitzvah that covers all man to man situations not specifically enumerated in the rest of the Torah. This mitzvah-commandment “to keep the straight path and do what is right” is given so that the Jew is aware all the times, in every situation, that Jewish behavior mandates doing what is good and right. In another verse commanding the Jew to do the “straight and right thing,” the Midrash explains that this refers specifically to how a Jew behaves towards others in business, and then states that any Jew who treats others properly in commerce, it is as if that person has fulfilled the entire Torah.

Just as proper behavior to others is the most important aspect of Judaism and of life in general, the lack of this behavior can bring disastrous results. The people in Noah’s generation, for example, committed many horrible sins, but the destruction of the entire world through the Flood came about only when the people began stealing from each other en masse. The great Vilna Gaon states the importance of goodness in simple terms. He says that the essential purpose of life is to constantly improve one’s character and act morally towards others. If not, what is the purpose of living? Another way to evaluate Judaism’s hierarchy of values is to see how a person will be judged after one’s life in this world is completed. The Talmud declares that a Jew will be asked a series of questions to assess his or her life. The very first question a person will be asked after death will not be about Yom Kippur, proper feeling in prayer, or even about belief in G-d. The first question will be, “Were you honest in your business dealings?”

As generations of Jews began to decline morally after the Sinai experience, King David advised that Jews should concentrate on eleven specific virtues, all of them between man and man. That Talmudic passage continues and explains that as time passed, moral decline increased. The prophet Micah streamlined the focus from eleven Jewish principles down to three areas: to judge truthfully, to do acts of kindness, and to perform the mitzvot-commandments without ostentation before others. Seeing yet a further decline, the prophet Jeremiah encouraged the people to focus on just two aspects: to do justice and to give Tzedaka-charity. All the prophets stressed what the quintessential element of Judaism entails — behaving ethically with others. This quality of kindness is so crucial to Judaism that the Midrash says that anyone who denies the importance of kindness denies the entire Torah.