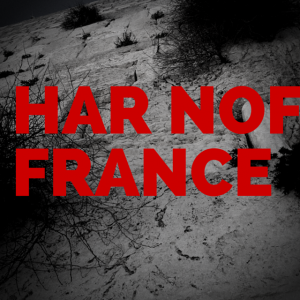 Four Jews were killed in the Har Nof murders. Four were murdered in the supermarket in Paris.  In both cases, a normal happening like this would have taken twenty to fifty lives. But God determined, with great exactitude, the specific lives, the circumstances, and the message to the world.

The Shabbat before Tisha B’Av, the most tragic day in the Jewish calendar, is called שבת חזון.  It is only one of three Sabbaths that are named after the Haftorah which is read and not after the portion of the week. (The other two are שבת שובה – in between Rosh Hashana and Yom Kippur – and שבת נחמו, the Shabbat just after Tisha B’Av.)

The אש קודש – Piasetzna Rebbe – points out that on Shabbat Chazon, we read a prophecy of Yehshayahu. Yeshayahu lived many years before the destruction he prophesied. Yirmiyahu would have been a better bet. He lived right around the Churban. But Yeshayahu had a prophecy called a Chazon. This is one of ten types of prophecy.  The Midrash (שיר השירים רבה (פ”ג)) tells us that Chazon – a vision – is the most intense of all the 10 expressions of prophecy.  This is because it represents seeing, as opposed to hearing. To hear about something – to read about it in the newspaper – is to experience something from far away. To see it, is to experience it for real.   This is why we choose Yeshayahu’s prophecy. Historically, he was further away from the Churban than Yirmiyahu. But he saw things clearly.

God wants us to see things clearly too. He wants us to experience the tragedy – to be personally affected. For this he doesn’t need thousands to die. He needs four and four.

Our period of history is one that is near the end of history as we know it. It is called Ikvesa DeMeshicah – the heels of the Messianic Era. The Torah calls this period “the End of Days” and refers to it several times.[1]

The transition from one period to another involves a certain amount of upheaval, and some of the early Sages (Ula, Rav, Rav Yosef) hoped that they would not live during this period.   Even though they knew that what was going to happen was for the good, to actually see them – that was another thing.  We want progress to happen – but we want to stay asleep. We don’t want to have to face the disruptions and dislocations and pain that it may involve. We want to hear about things, not to see them.

A father can know that his son is having an operation for his own good, but he can’t bear to watch. God Himself tells us this about Himself.  He puts seventy souls into Egypt. And He brings out a whole nation. But God cannot bear to witness the process. He says:

So now I know your suffering seems to be redundant; if He saw, He knows. But the Torah is trying to tell us that God’s “seeing” allows Him to really know. And when He knows, He cannot bear it anymore, and He takes us out of that accursed place.  So too שבת חזון – The Sabbath of Vision. The vision is not just of the destruction, but of the resolution.  God sees and therefore implements the salvation (ישועה). For that Haftorah of foreseeing great tragedy ends with redemption – ציון במשפט תפדה ושביה בצדקה, Zion (the Jewish people) will be redeemed with justice; and its captives through  charity.

The transition from our current era demands that God tie up all of history. No longer is there a breathing space for man to dawdle through history, squandering opportunities. God wants us to see – and to see clearly.   Whatever was not corrected before must now be corrected. The final Tikun Olam has to be made. All that was spiritually broken must be fixed.

But what if we don’t have enough merit to do any more than sustain ourselves through this period? What if we are not up to being His partner in fixing all that needs to be fixed before time is up?  For this, God has a solution. He uses His righteous. He extends their merits even further by taking their lives of holiness and ending them in holiness as well. Their deaths are no longer tragedies, but great flashes of holiness that light up the entire horizon. Chazon – we see and we understand.

Our Sages predicted that in our era, the evil will go on a rampage. Just as we get rid of one group of savages – Nazis, Communists… – another set of groups rear their heads. Evil seems to rule, and even enlightened European countries stop believing in their own culture sufficiently to stand up to the onslaught of the invading Islamic fundamentalism.

It had to be this way. For this is a time of the final clarification of good and purity against their opposites.  At this time, the most powerful alternative to Judaism and its values in the history of mankind will rise. The group who will promote this will be so dedicated a group that they will long to give their lives to this cause. Their own deaths will mean more to them than their cheap lives and the lives of others will be worth even less.

But all this is mere preparation to reveal God’s total control over everything. We must see the greatest evil – seemingly unstoppable – in order to understand and to see that God will rise over all, even that. Yes, God could reveal His unity over the universe without all of that, but then we will not have seen.  Chazon – we must see to really understand.  And then everyone will get their just reward.

And so, two contradictory thrusts take place simultaneously. On the one hand, God is weaving the final threads of His tapestry below the surface of His history to reveal, in the end, a complete picture to us that shows how everything – good and bad – contributed to a revelation of His Oneness, and – opaque as it may be now – everything will be clearly connected to Him.  But on the surface, history looks completely different. God’s influences and light are being driven even further underground by unprecedented evil.

In fact, these two forces are synergous. The future of the world is dependent on evil peaking and then crashing while that which works below the surface emerges just then to clarify the whole process.

These processes have nothing to do with reward and punishment. This world is not the environment in which people get their just rewards. But, if we are aware that we are actors in a grand historic drama, we can generate an unprecedented level of holiness.  We see the darkness, not the light. We see the holy four of Har Nof slaughtered. And we see the holy four of France slaughtered. But we are charged with understanding that from this great darkness will emerge a great light. The beast of evil is making its last stand.

And we, we who live during this period, should know the enormous privilege it is to participate in the final תקון הכללי – the great and final Tikun (correction) of evil in the world.  The more righteous a person, the more likely he is to be a vehicle to facilitate this final תקון, with the ever-present danger of his suffering as a result. The suffering may not be death or injury by terrorism. It may be a world in which the values for which the Tzadik stands are no longer the ones driving the world.  To be righteous in this era will to be to take a lonely journey of faith, to see that the Tzadik, with all his spiritual power, is not strong enough to correct what needs to be corrected by his actions alone.

But the time will come when every alternative will have been tried, every ism used up and exhausted.  Then, with no other solution in sight, we will finally come to realize that there is no alternative to the Geula. And when we will finally be prepared for that wondrous time of knowledge, spirituality and goodness, we will also understand why our era, by contrast, had to be so problematic.

This  contrast of dark and light is how God set up the world to begin with. Before the creation of the light on the first day we read that there was darkness on the face of the depths. (Since light had not yet been created, this darkness could not be the absence of light. And then God said, “Let there be light”. But even then, “It was evening [first] and it was morning [second] on one day.” However, now it was not dark (choshech); it was evening (erev).  Erev is a mixture of light and dark. Even in the night of our exile and suffering, there will now be some light. It will never be completely dark again.

God promised. And He will deliver. God will force us to see – not just to hear. He will impose just the exact amount of suffering in his wake-up call. And when we see, it will all be over. We are not helpless bystanders in the unfolding of this approach. We can step forward to take control of a history promised to us. Not the history of peak and decline that befalls other nations, but a meta-history whose unfolding follows God’s rules, not ours.