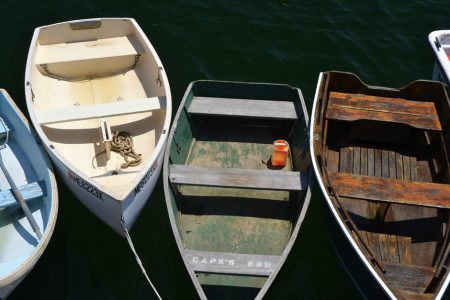 “If you want to take the island you need to burn the boats.” – Tony Robbins

Nearly five years ago I was facing an important decision, a career crossroads that, depending on its outcome, would greatly impact my professional future. I had spent the past fifteen years in the field of education, as a teacher, principal, and adjunct professor. I was leaving a school principal post at the end of the school year and was debating whether to seek another similar post or to transition into coaching and consulting. I left both doors open for a while before committing firmly to the latter option. I hung up a shingle and got to work.

To be honest, the first year in my current business was tough. Compounding the fact that I was trying to build credibility, brand myself, and make meaningful connections in a new field, I was dealing with a family relocation from the Deep South to the Northeast. As you can imagine, my phone wasn’t exactly ringing off the wall (or the hip) during the first few months. But even then, when I didn’t know how on earth I was going to pay my bills, I had no regrets. I was committed to my new direction and had burned my boats. There was no looking back.

The concept of burning one’s boats traces back to one of history’s most inspiring leadership stories, which took place in the year 1519. Hernán Cortés led a large expedition, consisting of 600 Spaniards, 16 or so horses and 11 boats, to Mexico. Their goal: to capture a magnificent treasure said to be held there. Upon arrival, Cortés made history by destroying his ships. This sent a clear message to his men: There is no turning back. They either win or they will perish. Though one may have assumed that Cortés’ men would have become despondent, with no exit strategy in place to save their lives, they instead rallied behind their leader as never before. Within two years, he had succeeded in his conquest of the Aztec Empire.

(Some date this concept even further back in history, to the times of Julius Caesar (in his conquest of England) or even the Ancient Greeks. Regardless, the scenarios and impact were similar.)

At its essence, burning boats represents a point of no return, a psychological commitment where the party involved recognizes that they have crossed a line never to cross back. There is no hedging, no looking over one’s shoulder. Everything now – all thoughts and efforts – must be focused on succeeding in this new reality.

Jewish tradition teaches a similar value. In ancient times, Israelite armies would besiege enemy cities from three sides only, leaving open the possibility of flight (see Rambam, Laws of Kings and Wars, 6:7). The Israelites understood that so long as the enemy saw that they had an escape route available, they would not fight with utmost earnestness and energy. In most cases, this played right into the besiegers’ hands.

Whether we face a true crossroads or simply want to achieve great things in our careers, personal lives, or both, it is imperative that we approach our decisions with a level of commitment that will drive us definitively forward. And if you lead others, you need to find a way to gain their commitment as well, to ensure that you work together towards your common goal of success.

The same holds true with business decisions, especially at times of market and/or organizational change. Kodak, for example, had to burn their boats to reinvent their business model from selling film products to offering digital services as well. Darwin E. Smith, CEO of Kimberly-Clark, made a strategic decision to sell his company’s paper mills and invest the money in brands like Kleenex and Huggies. At the time, he was mercilessly ridiculed by the media. However, the strategy soon began to look brilliant as Kimberly-Clark outperformed Proctor & Gamble and gained full control of Scott Paper. These companies burned their boats to find new ways to the gold.

Too often we see examples of would-be entrepreneurs holding on to their jobs while trying to set up a business. This communicates a lack of faith in their own business model for them to take the leap of faith. Other entrepreneurs operate different businesses with the belief that if one business fails, the other will save them. While these strategies may make sense from the perspective of holding on to a life preserver, they minimize the likelihood of success.

The same holds true in personal relationships. We fear rejection or other undesired outcomes so we float around and don’t take the necessary risk needed to find and sustain deep, fulfilling relationships.

There are times in our life when we need to make decisions even when we are unclear as to which path to travel. We gather as many facts as we can, measure the risks, and then use our best judgment and the insights of others to guide us forward. Once we make our decision, we have to be willing to stick with it and not allow fear and second-guessing to derail us. Instead of focusing on the what ifs, concentrate on the task at hand and the steps needed to be successful.

Safety nets and escape routes can protect us from pain and injury. But they also tend to reduce the effort, focus and commitment that we invest into a process. Once you have completed your discernment process, you have to be willing to burn the boats behind you and trust your inner voice to pursue your dreams. And never look back.

Rabbi Naphtali Hoff, PsyD, is an executive coach and president of Impactful Coaching and Consulting. He can be reached at 212.470.6139 or at nhoff@impactfulcoaching.com. Get his new leadership book, “Becoming the New Boss”, on Amazon or at becomingthenewboss.com/order.