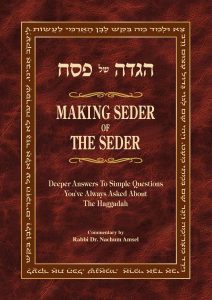 Deeper Answers to Simple Questions You Always Asked About the Haggadah

The meaning of the word “Seder” is order. Nevertheless, the seemingly illogical sequence and rituals of the Haggadah seem like disorder and אי סדר. Why call it a Seder when the entire evening seems to be anything but an orderly process?

Making Seder of the Seder

The name of the entire process for the first night of Pesach (and the second night as well, outside of Israel) is called the SEDER, which mean “order.” This name clearly implies that all of the mitzvot, rituals, symbols and tefillot-prayers of the Haggadah are arranged in a particular

and meticulous sequence, just as the name for the Jewish prayer book, Siddur, also implies a specific order and arrangement.

And, yet, even a cursory analysis shows that there seems to be no particular organized arrangement to the events and process of the Haggadah, especially when compared to the “order” of the Shabbat evening or other Yom Tov Festival evening meals. Normally, at each Shabbat or holiday meal, the first ritual of the evening is the Kiddush recited over wine. Then, traditionally, Jews ritually wash for bread, Challah, or, on Pesach, for Matzah, and recite a prayer over this ritual washing. This washing is followed by the beracha-prayer over the Challah or Matzah, and the entire meal is then eaten in earnest. But on Pesach night, while the meal seems to start off in a similar manner — with Kiddush followed by ritual washing — there is no blessing at all following the washing. Then the bread (Challah or Matzah) is not eaten. Rather, a green vegetable is eaten instead.

While we would normally expect the full meal to now be served, nothing more is eaten for an entire hour or longer. Rather, in the next paragraph, we invite people to join our Seder. Why invite them now when there is no chance anyone will join us at this point? This also seems to make no sense and is “out of order” of any logical sequence. Then four questions are asked, but are never specifically answered. Many verses are recited, but without any apparent order to join them thematically. What is really going on here? Why was each of these steps in the structure of the Haggadah instituted by the Rabbis?

Are these components merely just a series of rituals, prayers and verses, or is there any justification for the name “SEDER?”

To continue reading, please download the entire Haggadah in PDF.

To order hard copies of Making Seder of the Seder (90 NIS or $25), please contact: Rabbi Nachum Amsel <namsel at netvision.net.il>