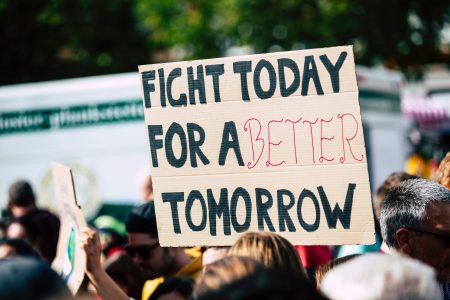 The American system does not have an entry bar – a character or wisdom test or an ethics bar that has to be passed to be eligible for President.  There is a strong feeling that you can have a bad character and still be a good President.

In our previous post, we contrasted this with a Jewish King who had to carry a Sefer Torah around with him all the time.  During the Shmoneh Esreh he was required to bow and to stay prostrated for the entire time. This was to compensate for any arrogance he might develop.  Of the seven attributes which HaShem created in the world, the Jewish king embodies the seventh attribute, Malchus. Malchus means to completely nullify oneself to the Kingdom of HaShem – to have no personal interests other than this. [1]

In this blog we wish to deal with a second major issue of the current situation – what does Judaism have to say about the ethics of protest? Really, there are two separate obligations involved: The mitzvah of tochacha applies to a situation where there is a chance of changing someone else’s behavior for the better. The chiyuv of mechah (protest) applies where there is no chance of behavior change, but the issue is one of public standards. Usually, it is Rabbinic leadership who are obligated in this, or, if they so decide, with the involvement of the broader community.

These concepts, as they apply to non-Jews or an essentially non-Jewish country like the USA would require separate treatment beyond the scope of this blog. However, the values reflected below do impact on our attitudes in general to when and how protest is appropriate.

“Love which does not contain the element of criticism is not love”, say the Sages. [2] But this mitzvah to reprove our neighbor [3] requires exceptional wisdom and great sophistication. [4] First and foremost we must do this by example. Reish Lakish said: “Correct yourself first, and then correct others.” [5]

The idea of this mitzvah is rooted in a profound understanding that, in Judaism, everything is my problem. It is my problem because my fellow’s soul shares with me its source in the collective Jewish soul at Sinai. [6] There is ultimately a very deep, even mystical sense of unity amongst ourselves that leads to us all being responsible for each other. [7] We all share each other’s spiritual reality. [8] We all have some element of our neighbor inside of us.

We will pay the price for failure to prevent an outrage as if we committed the outrage ourselves. [9] Noah, a holy man, was a case of failed greatness because he never reached out to correct his generation.

The Hebrew word for reproof – tochacha – comes from the word hochacha, which means to prove: in the recipient’s mind and heart that matter must be proven as a value he now wants for himself. Given this, persuasion may be a better translation of the word tochacha.

Some say that we no longer really know how to fulfill this mitzvah in such a way that we get buy in from the recipient. Accordingly, today our whole approach has to change. We can no longer give reproof for wrongdoing. Rather, we have to hug these people close and inspire their commitments through authentic and unconditional love. [10]

Even when we know that our efforts at constructive reproof will be fruitless, oftentimes we must still protest. [11] Protest is not to effect change as much as it is the moral voice which keeps the issue alive. We can get used to injustice and all sorts of evil. Protest tells us that, even though we feel helpless right now, we refuse to lose our sensitivity; we refuse to accept that this is the norm.

We learn of Abraham risking his life by protesting against the idolatry of his time. And, from that time on, Jews have been the quintessential conscience of the world, protesting injustice wherever we have seen it, taking moral stands where others have been too frightened to do so. This is our holy chutzpa. [12]

In the story of Esther, Mordechai refuses to bow Haman, willing to risk all for the sake of what he believed in. [13]

Edmund Burke is reputed to have said, “The only thing necessary for the triumph of evil is for good men to do nothing.”  But protest is a tricky business. Personal feelings, animosity and a sense of heroism can so easily cloud one’s judgment. Judaism has rules as to when and when not to take such action. When should protest reach the level of active rebellion, as in the case of the Maccabees against the Greeks in the Chanukah story? And when should our protest be silent but continue to act unintimidated even if it leads to our own death as in the case of Rabbi Akiva? [14]

We have to know that the cause is just, that the means for reaching the cause are the right ones, that all the unintended consequences have been accounted for, and that no other values –perhaps of equal or greater weight – are being sacrificed in the process. The leadership – who have to be of the right sort to begin with – have to be sure that they remain in control, and that they themselves don’t get swept up by the seething energy and excitement of the crowd.

Protesting, even in its quiet form, is very morally satisfying. It gives the feeling that one did something tangable for one’s cause. It provides a sense of camaraderie, and even a form of entertainment. (In Israel, protest night is Saturday night.)

All of this makes the decision to protest and the execution thereof exceedingly complex.

We cannot rely on our moral compass for these decisions – there are too many heated emotions and feelings of self-righteousness that distort our thinking. Moreover, once unleashed, we cannot know where the process will lead to, what hatred and violence will follow. It is so easy to become our own god, to believe in our cause more than we believe in the G-d-given principles that were given to us. “Aggressiveness is an important trait that is needed for the world. But it is like fire: in limited and directed amounts it is good for cooking etc. But when it surges forth unbridled, it can destroy everything.” [15] It is so easy to hate ‘the enemy’, and justify everything in the name of fighting evil. “An act of protest … may not contain even a trace of personal benefit.” [16]

When we are not sure if protest is the right thing, we must be quiet. “Learn to be silent,” said Rav Mendel of Vorke, “so that you will know how to speak.”

It is not clear what the Jewish obligation to protest in a country where we are essentially guests in our state of exile. Yona was sent to rebuke Ninveh, but we should be weary of drawing lessons from a prophet sent by G-d on a special mission. Whereas reproof (tochacha) clearly only applies to our mitzvah-observant brethren (הוכח תוכיח את עמיתך – עמיתך במצוות), protest – מחאה – doesn’t have clear parameters. Iyov was punished for not crying out at Pharaoh’s evil plans, even though he felt he could nothing about it. To sit quietly in the face of evil is to show that it doesn’t hurt us – we are not pained at what we see. Certainly, the ideas above can serve as a yardstick for judging the reactions of the broader society.

The complexity arises when a large group of Americans feels as morally clear in their stance as do those who have the opposite view. In fact, they are not only arguing morality – they are arguing about the facts. And their minds are made up. This climate of super-hot emotions does not meet the standard where protest is likely to take place in a controlled and respectable manner. It only takes a minute for the wild beast in some of us to be unleashed. And once that happens, all the carefully thought out parameters described above will be of no effect.

[8] Ritva, Talmud, Tractate Rosh Hashana, 29a explaining, “For the Jewish nation is responsible for one other.”

[12] Every person is obligated to say, “When will my deeds reach the deeds of my forefathers, Abraham, Isaac, and Jacob?” (Tana de’bei Eliyahu, Ch. 25)