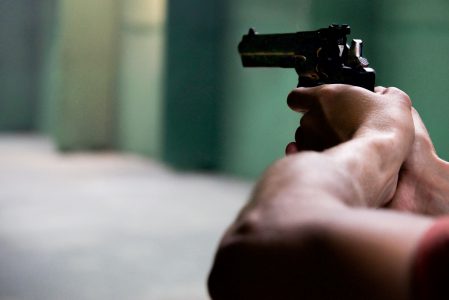 We live in an age where violent crime is much more rampant than in the past. All people want and need basic safety and protection from attack. It is clear that no increase in the number of police force alone can guarantee full protection from every potential criminal, whether that victim is inside or outside one’s home. How, then, is the law abiding citizen supposed to attain adequate protection? It seems reasonable to allow law abiding citizens to acquire the means to protect their lives if threatened by criminals. Certainly, most people would seem to agree that a person may retaliate if one’s life is threatened. What is the Jewish view on this?

Even if a Jew is permitted to kill another person when threatened, at what point, precisely may he or she retaliate?

If the victim waits until the trigger is actually pulled, then it is too late to retaliate and protect oneself. How much before the pulling of the trigger is it called a legitimate threat? Would it be permitted to shoot a potential attacker – as soon as he is in the house armed with a gun? In the house with a bat? Outside the house with a gun just prowling around? Is being robbed at gunpoint considered life threatening? Is killing a mugger trying to rob you on the street legitimate?  Is a verbal threat ever grounds for self defense and killing a person? The questions are indeed sensitive, but very real, given today’s society and its crime rate. We will see that Judaism has specific responses for each situation.

We know that one of the highest values in Judaism is the infinite value placed on each human life. Since life has an infinite value, it is equated with the worth an entire world. Is it not then reasonable to assume that a Jew can protect his or her life, of infinite value, when threatened. However, if by protecting one’s own life, someone else’s life, also of infinite value, must be taken, then human life was not really protected. Therefore, while it is logical to assume that Judaism would allow or even demand that a person protect his or her own life, how would a Jew be able to justify killing another person in order to achieve that protection of life? That other individual, although he or she may be an attacker, also has a life of infinite value from a Jewish perspective (even if the person is evil or immoral). From one Talmudic passage, it seems there is no justification for self defense if it causes the killing the other person since we cannot determine whose life is more valuable and is worth protecting. Paraphrasing the Talmudic expression in another context, “Who says that your blood is redder than his blood?” Since we cannot know the real value of any specific life, man cannot “play G-d” and kill one person at the expense of another. It seems that man should not be able to kill someone in self defense, according to Jewish law.